A unit train consists of cars carrying a single commodity, usually from a single origin to a single destination, although in some cases cars from several origins are grouped together. These trains do not need classifying at yards en route, and so can travel across the railroad network more quickly and more cheaply than manifest trains.

Rear end DPU units on a UP coal train.

Compared to manifest trains, unit trains will be provided with fewer locomotives. This is because unit trains are not expected to stop regularly, and rarely consist of time-sensitive cargo; on flat routes, it is not uncommon for unit trains to have HP/Ton ratings of 0.4-0.5. When unit trains run through from one railroad to another, it is very common for the train to retain its original locomotives throughout, avoiding the hassle of swapping locomotives twice on every round trip.

Due to the weight of unit trains, it is very common that they use [Distributed Power Units (DPU)] - remotely controlled locomotives in the middle or at the end of the train - to improve train handling. Without these, trains are at risk of breaking apart under their own weight. DPU arrangements are described using notation such as "2+1", indicating two lead locomotives and a rear locomotive, or "2+1+1", indicating two front, one mid-train, and one rear locomotive.

When unloaded, unit trains usually retain all their locomotives despite being much lighter, as all locomotives will be required again when the train is loaded. In order to save fuel, locomotives on empty trains may be placed "In Tow" (i.e. turned off) by selecting them and pressing the UiT (Unit in Tow) button in the Train Information Window. Railroads typically require that one locomotive in each DPU group must be running at any time; in a 2+1 configuration, the second unit of the front set would be placed in tow when running empty.

In FYM, the TSARs usually specify the number of locomotives, DPU arrangements if relevant, and/or the recommended HP/Ton.

On unit trains carrying hazardous cargo, most commonly ethanol and crude oil trains, an additional empty car must be placed between the locomotives and the loaded cars. This is required by law to provide some additional protection to the crew in case of an accident. Most commonly, the spacer car is an empty covered hopper or box car. It is typical for spacer cars to be placed at both ends of the train, as this simplifies switching at the origin/destination. 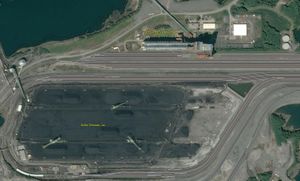 Bulk unloading terminals at Prince Rupert, BC. The coal terminal (bottom) contains an unloading loop, while the grain terminal (top) does not.

By their nature, unit trains rarely perform any activities en route. It is important to fuel the locomotives (including DPU) en route, as locations such as coal mines and grain elevators rarely have their own fuelling facilities. Bad order cars should be removed for repair and sent onwards to their origin. In some areas, dedicated inspection and repair facilities for unit trains exist - for example, BNSF's Alliance, NE yard is dedicated to supporting coal trains to and from the Powder River Basin coal mines in WY, and UP's North Platte, NE yard also has facilities dedicated to coal trains.

At some origins and destinations, loop tracks allow unit trains to be loaded without any switching - the train is simply driven around the loop, and each car unloaded in sequence. At smaller terminals, or those constrained by space, a train will need to be broken apart and handled in smaller blocks of cars. Empty cars usually travel directly back to their origin in the same unit train. However, in some cases, the cars travel back in smaller blocks of cars as they are unloaded, or back to a central location to be distributed among several loading facilities; this is most often seen for grain traffic in Canada.

The list below covers some of the most common types of unit train. However, other examples do exist, as required by the needs of industry.

Coal is the king of all unit trains. 70% of the 774 million tons of coal mined in the US travels by rain, accounting for 32% of cargo on US railroads by weight. The vast majority of coal travels to coal power plants, with approximately 13% being exported, and a small fraction used to create coke for steelmaking. The Powder River Basin in WY/MT, served by BNSF and UP, is the most prolific producer, with almost all output travelling by rail. CSX and NS serve numerous coal mines in WV, PA, and KY. Coal is also mined in smaller quantities in states such as IL, IN, CO, and UT. In Canada, the majority of coal is mined along the BC/AB border, served by CP and CN, and is mainly exported overseas. Train lengths are typically in the region of 100-135 cars. A small amount of coal travels on manifest trains.

Grain is produced across large areas of the US and Canada, and like coal, is used both for domestic consumption and export overseas. Most grain elevators lack loading loops, instead loading cars in smaller blocks. An entire unit train may originate at one large elevator, or may instead be put together from blocks of cars from multiple origins - the latter is relatively common in Canada, where large quantities of grain travel to the same few ports for export. A significant amount of grain also travels in manifest trains from smaller elevators, or to smaller customers. Animal feed may also travel in unit trains, similar to grain.

Recent oil drilling activity in regions such as the Bakken (ND/MT) and Eagle Ford (TX) rock formations has greatly outstripped the capacity of existing oil pipelines, resulting in large quantities travelling by rail to refineries. As crude oil is highly flammable, these trains must have spacer cars between the locomotives and the tank cars.

Oil and gas extraction in areas such as the Bakken and Eagle Ford formations relies on hydraulic fracturing, or fracking, in which fracking fluid is pumped into the ground to force crude oil out. This fluid consists of water, sand, and various additional chemicals. In recent years, vast quantities of sand have been shipped by rail to these areas. Sand usually travels in covered hoppers, reducing the amount of sand blown off during transport, but some does travel in open hoppers.

Ethanol is now a common fuel additive in the US, being seen as a renewable fuel source. Produced from corn at ethanol plants among the vast cornfields of the Midwest, unit trains ship ethanol to terminals nearer to larger urban areas. Like crude oil, ethanol is a hazardous cargo, and spacer cars must be used.

Various forms of fertilizer, most notably potash, can be shipped in unit trains. These may either travel to terminals in agricultural areas, or instead take fertilizer to marine export terminals (most notably, Canadian potash). Solid fertilizer travels in covered hoppers.

These materials are most often transported to rapidly growing urban areas with a demand for construction material, although some cement is exported overseas. Rock is transported in open hoppers or gondolas, while cement is travels in short 2/3-bay covered hoppers, due to its density.

Iron ore, originating mainly from Minnesota and the Upper Peninsula of Michigan, can be transported by rail to steel mills. However, for the numerous steel mills located on the shores of the Great Lakes, ore is instead transported by ship from ports near those mines in MN and MI. In modern times, ore travels in dedicated hoppers or gondolas.

A byproduct of oil/gas refining, sulfur has uses in several chemical processes. It can travel either in solid form in gondolas, or more commonly in liquid form in specially heated tank cars.