While Tutorial 1 - Switching at Rolla CO and Tutorial 2 - Local Work at Bowling Green KY covered "manifest" traffic, where trains carry a mix of cars for different origins and destinations, this tutorial covers the concept of unit trains, which carry a single type of traffic from origin to destination, without any need for switching at classification yards. It will also cover how and when to fuel locomotives, repair cars, and how "virtual" maps (also known as virtual IDs or vIDs) work.

The second tutorial will take place on the NM:Gallup 1252 map. As before, you will need to download the relevant map by selecting it in the Maps and Trains window and pressing the Download Map button - see Tutorial 1 if you need a refresher on this.

There is a single train for this tutorial. If you have not yet been registered, you will find it listed as a file beginning with Y1252 with Tutorial3. Alternatively, all tutorial trains can be downloaded by unregistered or registered players by selecting "Download Tutorial Trains" in the "Tutorial" menu on the toolbar.

An overview of Gallup

Overview of the Gallup, MN map. BNSF's Southern Transcon runs through from left (California) to right (Chicago), with Gallup Yard approximately in the center of the map.

Gallup, NM is located on BNSF's Southern Transcon, their mainline between Chicago and Southern California, seeing around 100 trains a day. Gallup is located in western New Mexico, near the border with Arizona, with the yard serving as a base for local traffic in this remote corner of the state.

As with Bowling Green KY in Tutorial 2, Gallup NM is assigned multiple map identities in FYM: Gallup itself, Carbon Mine NM, the Lee Ranch Subdivision NM, and Zuni NM. Only Gallup NM is represented in game with playable track; the other three map identities are virtual maps. Virtual maps are used in FYM to represent parts of the network that are not directly mapped for one of several reasons:

A virtual ID is indicated in FYM by an additional set of light blue labels near to a map exit. At Gallup, the label for Carbon Mine is at the left end, below exits 1 and 2, while those for Zuni and the Lee Ranch Subdivision are at the right end, above exits 3 and 4. The labels indicate the name of the virtual ID, the phrase "Local Delivery" to indicate that they refer to a virtual ID where cars must be sent off the map for delivery, and either one or both of "Load" and "Unload". These latter two labels can be clicked on to bring up the list of cars handled by the virtual ID, just like a normal siding.

Virtual IDs are also indicated on the Connection Map, being displayed as hollow circles. If you need a reminder on downloading and viewing connection maps, see the section on them in Tutorial 2. 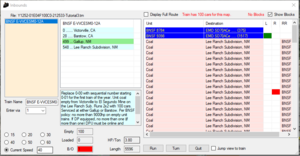 Display of the empty coal train, showing low fuel on the leading locomotive and a bad order car.

After you have downloaded the train file for Tutorial 3, you should find a single empty coal train listed in the Inbound Trains window (hotkey Ctrl-Z). The train consists of 100 empty coal cars returning to El Segundo Mine (located on the Lee Ranch Subdivision), to be loaded for the CEMEX's Victorville Cement Plant. Four locomotives are powering the train, operating in 2x2 DPU configuration - two leading the train, and a further two pushing from the rear. On viewing the train in the Inbound Trains window, there are three items worth noting:

The notes for the train, displayed below the route, also note that the train is to be serviced at Barstow and Gallup. This includes carrying out the fuelling and repairs needed for this train. This should be carried out before it is sent for loading, so set a route from Exit 1 (where the train is entering) into Gallup Yard. The switch leading into the yard is located near exit 1 at CP West Gallup, leading from the brown main lines onto the black track labelled "West Long Lead". The train will fit on any of the long yard tracks.

Re-open the Inbound Trains window and bring the train in; you may also wish to select a lower speed than the 40mph it is entering at, perhaps 15 or 20mph. When the train enters the map, there are various indicators of the need for fuel and repairs: 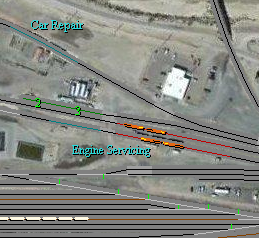 Fuelling locomotives on the engine servicing tracks. Fuel tracks are indicated by red.

Many yards in FYM have fuelling facilities, indicated as red track. At Gallup, a small locomotive servicing facility is located at the east (right) end of the yard. Locomotives can be fuelled by driving them onto a fuelling track at 15mph or less. You will need to uncouple each set of locomotives separately and route them to the fuelling tracks, returning them to either end of the train afterwards.

If a locomotive needs turning, there are several options: 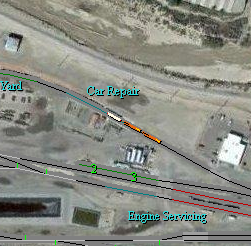 Both cars and locomotives can become damaged or "bad ordered" in FYM. Coupling trains in excess of 20mph will result in damage, while random events will cause cars to need repair. A bad ordered car cannot be loaded, while a bad order locomotive will not provide any power. Both should be repaired as soon as possible, either by repairing in the current map if possible, or by forwarding them to an appropriate repair facility.

Any vehicle can be repaired by sending it to a repair track, indicated by a turquoise colour. Gallup has three separate repair tracks:

Use the locomotives at the head end of the train to remove the bad order car. Filter 4 (press 4 on the keyboard) will show bad order cars in flashing red, and will be helpful in identifying the car. It is also shown with a red mark in the Train Information window. Take the car to the track marked Car Repair and drive it across at 15mph or below, and it will be repaired. Put the train back together ready for departure.

BNSF 9725 shown as unit in tow. To turn the locomotive on, select it and press the UIT button in the controls below.

Unit trains require much more power to move when loaded than when empty. However, if the unneeded locomotives were removed after unloading, it could be difficult to ensure that additional locomotives would be available at the loading point. Gallup is a good example of this - it has no terminating trains other than empty coal trains, and is not home to a major locomotive facility, meaning that there is no regular source of locomotives that could be added to trains. As a result, it is common for all locomotives to stay with a unit train.

In order to save fuel on the empty trip, railroads will turn off unneeded locomotives on empty unit trains, or other trains where more locomotives are available than are needed (e.g. because of previous setouts, or because additional cars will be picked up later). Such locomotives are termed "Unit-in-Tow" (UIT), and this functionality exists in FYM. In the Train Information window for the coal train, locomotives BNSF 9398 and BNSF 9725 are shown with a lighter blue background, and have "Unit in Tow" shown on the right hand side. Note that even with these units turned off, the train still has 3.8 HP/Ton, a very high value - for reference, BNSF's highest priority intermodal trains are scheduled for only 3.5 HP/Ton, ordinary manifest trains are 1.4 HP/Ton or lower, and loaded unit trains are often well below 1.0 HP/Ton.

As we are about to load the coal train, we need to start the UIT locomotives. Select each and press the UIT button in the Train Information window, which will toggle their unit in tow status. This can also be used to set unneeded locomotives as unit in tow.

The train is destined for El Segundo Mine, located on the Lee Ranch Subdivision. This virtual ID is located to the east of Gallup, through exits 3 and 4. Set a route out of the yard onto the main line, and send the train towards either of these exits.

When the train leaves the map and the Train Leaving Map dialog opens, make sure the Local Delivery option is selected, and press Save Train to HD. Local Delivery allows cars to be delivered without sending them to a siding, both for virtual IDs and for cars destined to a non-virtual map. When a train is sent to local delivery, it must consist of cars for only one map; if several virtual IDs exist, cars for each one must be delivered on separate trains.

After a train is sent to Local Delivery, it returns to the current map, and can be brought in via the Inbound Trains window (Ctrl-Z). Trains sent to local delivery will also be automatically turned around on return. Bring the train back into the map, and open the Train Information window so that we can assign the correct TSAR for its loaded journey to Victorville. Open the BNSF TSAR window, and select BNSF C-ESMVVC to Victorville. If you find it difficult to find the TSAR - and there are many, many trains that pass through Gallup! - you can use the O/Here button at the top to restrict symbols to only those originating at a specific map, and select "Lee Ranch Subdivision" from the MIM Yard dropdown to show only symbols originating on that subdivision. Assign the TSAR and press "Finish" on the Train Information window.

Finally, set the route back towards Exits 1 and 2, sending it back towards California via the next map in its route, Barstow CA. Once it has left, close the map and upload the train.

You have now learnt about several of FYM's features beyond loading and unloading cars at sidings, which you covered in tutorials 1 and 2. Fuelling locomotives and repairing cars are operations you will need to carry out at many maps in FYM, and players appreciate neighbouring yardmasters who ensure that trains are kept well fuelled.