Difference between revisions of "Locomotives" 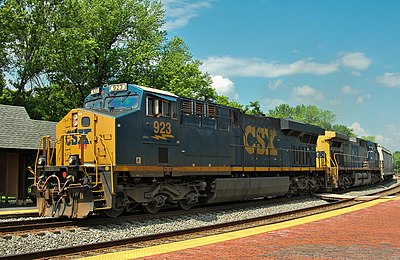 On North American railroads, a wide variety of diesel locomotives are in use for hauling freight and passenger services, with electric locomotives used on some passenger routes, as well as a very small number of isolated freight lines (not represented in FYM). Locomotives are mainly characterised by their horsepower (HP) rating, and can broadly be divided into small (3000HP and below) and large (above 3000HP). Smaller locomotives are typically used for switching and local freight services, while larger locomotives haul long distance freights. Locomotives are usually owned by a specific railroad company, and typically remain on their "home" railroad. A small number of locomotive leasing companies also exist, mainly offering services to shortline railroads and industrial switching.

The words locomotive, loco, engine, and unit can be used interchangeably. The term power is used in a more vague sense to refer to a railroad's fleet of locomotives, and it is common to hear a player asking "do you have any spare power?" when they are running low on engines.

Each locomotive has a Reporting mark, such as UP 1234, indicating the owning company (UP, the Union Pacific railroad) and the locomotive's individual number. In addition, every locomotive is assigned to one of the 200+ locomotive types represented in FYM, which describe the detailed characteristics of that locomotive. These characteristics are:

Unsurprisingly, diesel locomotives must be fuelled regularly. This is usually done at fuel tracks, usually located in locomotive maintenance facilities. On some busy mainline routes, fuel racks are located along the mainline tracks at strategic locations to allow the fast fueling of through trains. (To see a good example of this, look at the run-through fueling tracks BNSF has on the Belen, NM map.) It is also possible to fuel locomotives at remote locations from fuel trucks; this is not simulated in FYM.

In FYM, locomotives are simulated as having a range of 3000 miles between fuel stops. The miles since the last fuel stop is indicated in the "L" column of the Train Information Window, and when hovering over the locomotive with the mouse. Once a locomotive reaches 2500 miles, a warning will be displayed when it enters a map, and it will flash until refuelled. If a locomotive exceeds 3000 miles, it runs out of fuel, and no longer provides any power.

Locomotives can be refuelled at a Fuel Track, which is colored red. In the Connection Map, yards with fuel facilities are marked with the letter "F". Players should fuel locomotives regularly, especially at major fuelling facilities. Some trains will even have notes in the TSAR reminding players to fuel trains, especially if a train is about to embark on a round trip (typical for unit trains) where no fueling facilities will be available until the train returns to that yard. Trains departing from major terminals (for example, BNSF's Galesburg Yard or any Amtrak long-distance terminal) should have their engine fuel topped off before departure.

In some cases, not all locomotives need to be turned on to haul a train, and disabling these locomotives saves on fuel and maintenance. Common examples are coal or grain trains, which require all locomotives when loaded but not when empty, and transfers of locomotives from one yard to another.

This feature is present in FYM. In the Train Information Window, a locomotive can be set "In Tow" by selecting it and pressing the "UiT" button. When this is done, "Unit in Tow" will be displayed at the end of the locomotive's entry, and it will provide no power to the train, and no fuel will be used. Such units are also indicated when hovering over them with the mouse in the map.

If you load a coal, grain, or other unit train, make sure to turn on all locomotives before the train leaves. This is done in the same way as before - select it in the Train Information Window, and press "UIT".

A locomotive that is damaged and marked Bad Order must be repaired at a Repair Track before it can provide any power. Locomotives are only bad ordered when they are in a collision.

The North American locomotive market has been dominated by two manufacturers, EMD and GE, since the end of the 1960s. An overview of the locomotives from these manufacturers, and others, is given below.

Electro-Motive Diesel (EMD), formerly the Electro-Motive Division of General Motors, has been producing diesel locomotives since the 1930s. The company's products are usually prefixed by two letters followed by several digits and letters, such as SW1500, MP15DC, GP38, or SD70MAC.

The EMD SW (SWitcher) series consists of small locomotives rated at 1500HP or below, with models built from 1939 until the mid 1970s. The MP (Multi Purpose) series extends this to the mid 1980s. As suggested by the "switcher" designation, these locomotives are mainly used for switching duty in yards or industries. The more powerful SW variants and the MP15DC/AC/T types are still in use on Class I railroads, but in dwindling numbers. However, SW locomotives of all types are very commonly found on private industrial switching duties at grain elevators, steel mills, and chemical plants.

The GP (General Purpose) and SD (Special Duty) locomotive families evolved in parallel, with the GP locomotives having 4 axles, while SD units have 6 axles. The early GP7 and GP9 units were incredibly popular, and are commonly found on shortlines and in industrial duties. The GP38 (2000HP), GP40 (3000HP), and SD40 (3000HP) units were similarly popular products, in addition to their "Dash-2" upgrades (GP38-2, GP40-2, SD40-2). These are still present in large numbers on Class I railroads, carrying out most switching and short distance freight work. A large variety of specialised, modified, altered, or upgraded types of these locomotives exist, but their characteristics are broadly similar. Developments into the 1980s and 1990s brought some units above 3000HP, such as GP60s, SD50s, and SD60s; these can also be found on Class I railroads.

In the 1990s, the SD60 and SD70 lines provided more powerful locomotives with around 4000HP, which form the modern mainline fleets of Class I railroads, in addition to GE's competing products. A major change was the introduction of AC traction motors to some models, which led to large increases in the available tractive effort. The more powerful SD80MAC and SD90MAC units did not prove popular with railroads, with the SD90MAC suffering badly from reliability issues.

The General Electric (GE) company has been involved in diesel locomotive manufacture since the late 1930s, but until the last few decades, it did relatively poorly in the North American market, mainly selling its products overseas. Its Dash-8 and Dash-9 lines cemented its place as a provider of mainline locomotives, and it has continued in that role to this day.

Early GE switchers are only found in industrial switching. These are mainly referred to by their weight, with the 44-Ton and 77-Ton variants being most common.

Despite being comparable with EMD products such as the SD40-2, GE's Universal Series (e.g. U18B) is not well represented in North American railroad locomotive fleets, even on shortlines. However, such locomotives are commonly found overseas.

GE's Dash 8 locomotives, introduced in the late 1980s and early 1990s, were reasonably successful, and can still be found in mainline use. The Dash 9 series offered upgraded electronics and trucks from the mid 1990s, and were hugely successful compared to older GE models. AC traction motors were first provided with the AC4400CW and AC6000CW models, with the latter proving more reliable than EMD's competing 6000HP product, the SD90MAC. Further upgraded models with both DC and AC traction motors were grouped into the Evolution series, such as the ES44AC and ES44DC. The ES44C4 units are similar to the ES44AC, but only four of the six axles are powered; these are typically used on fast, light intermodal trains. GE's latest offerings are the ET44AC and ET44C4, upgraded versions that are compliant with modern air pollution laws.

The American Locomotive Company (ALCO) and its Canadian subsidiary, the Montreal Locomotive Works (MLW), was a major force in locomotives until the end of the 1960s, producing a large number of both steam and diesel locomotives. However, ALCO produced its last locomotive in 1969, following the collapse of its partnership with GE in 1953. Very few of ALCO's main line locomotives, the Century series (e.g. the ALCO C424), remain in service. A slightly larger number of its Roadswitchers (RS-) and Switchers (S-) remain in use on shortline railroads and industrial locomotives.

In the 21st century, a number of companies have begun offering either rebuilt or newly built switchers, as both GE and EMD are almost entirely focused on sales of large, mainline locomotives. These new units offer better fuel efficiency and reduced emissions, with several models incorporating battery technology and multiple separate diesel engines that can be turned on only when required. Such manufacturers include MotivePower Inc. (MPI), National Rail Equipment (NRE), Progress Rail, and Railpower Technologies (RP).

Whilst a number of these locomotives have been purchased by both large and small railroads, they are still generally outnumbered by much older switching locomotives.